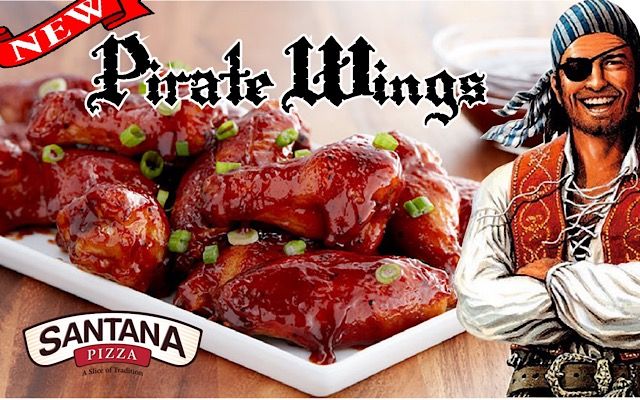 Pirate Sauce was created by Gerard. Those of you who know him well know he calls himself ‘The Sauce Boss’. For well over 30 years he’s been making sauces for family gatherings. Such as BBQ, and cilantro vinaigrette dressing, among dozens of other concoctions. At one time he was in discussions with Heinz to license some of his recipes.

If you have eaten wings at Santana, you’ve tasted his handy work. He is particularly proud of his latest creation- ‘Pirate Sauce’.

Slowly but surely, it is becoming the most popular wing sauce flavor on the menu.

Pirate Sauce is a complex BBQ sauce, a proprietary blend of Caribbean spices including a hint of scotch bonnet peppers. It is slow-cooked with golden brown rum and molasses. It’s worth the time and effort to make- a true Pirate’s treasure. Pirate Sauce is a little sweet yet a little spicy or you could just describe it - Yo Ho Ho and a bottle of Yumm!

They are already selling small quantities of Pirate Sauce to customers. There are so many ways to enjoy this sauce! You can grill with it, others drizzle it on their brisket sandwich, and some dip their french fries or pizza in it. We’ve caught some just enjoying it by the spoonfuls!

Visit Santana Pizza PBG and ask for it by name, ’Pirate Wings’ please!